At 7:32 AM Michal Ann Goll Stepped into Heaven
This past weekend I ministered in a conference hosted at Mahesh and Bonnie Chavdas church in North Carolina. It was a powerful time and I was blessed to be a part of it. However I was in contact with Kathy Colbert, who has helped so much with Michal Ann during this season, and she made me aware that Michal Ann's strength was slipping and that I needed to come home. On Sunday night I did return home and my good friend Bill Greenman picked me up at the airport and we began making our way to the house. Earlier that day Mickey and Barbara Robinson had come over and prayed for Michal Ann and as they ministered to her, a big smile came to her face as they prayed. They were still at the house when we arrived; Bill came in with me and as he prayed for her, again a smile came over her face and a peace invaded our bedroom. As I spent the night in the room with her, I knew that she was nearing the end of her journey. The next morning, after I ministered to my wife through the night, Michal Ann breathed her last breath on earth and stepped into Heaven to be with her Lord, her first love! Michal Ann fought harder than anyone could have believed, including the doctors. I was always impressed with her fight to live until the last! Her legacy of Compassion Acts is going to live on in the hearts of many - and the lives that it is changing will help change the world to move in the Compassion of Jesus!We will be having two services for Michal Ann as she is worth the double blessing. HA! One will be in Nashville, TN on Thursday and the other is in the process of being planned in Odessa, MO this weekend (details will be forthcoming). Michal Ann will be buried at the Dover Cemetery in Dover, MO. Donations in lieu of flowers on behalf of Michal Ann may be made to Compassion Acts to support the dream that she carried in her heart for the poor and broken of the earth. The details for all arrangements are below.

Please feel free to pass this information on to others.
Never, Never quitting!!! James W. Goll with Michal Ann praying me on!
If you would like to give in honor of Michal Ann Goll, checks can be made out to Compassion Acts and sent to PO Box 1653, Franklin, TN 37065, or contributions may be made online as well. Gifts are tax-deductible as allowed by law and a receipt for your donation will be mailed to you. Thank you for your support.
Posted by Joe Butler at 10:31 PM No comments:

Check Out Serve! with Steve Sjogren 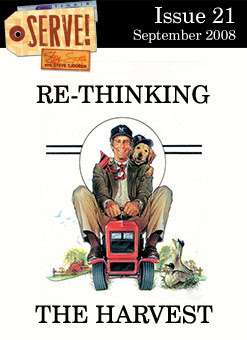 I want to encourage you to check out this e-zine called Serve! with Steve Sjogren. Just click on this link http://www.serve-others.com/issue21/.
Steve is a pastor, author and one of the great minds on how to reach people that are outside of the "church culture."
Please check it out.
Posted by Joe Butler at 1:19 AM No comments:

Joseph was a dreamer and it got him into trouble. In Genesis 37 we read two dreams that God gave to Joseph. The first dream was sheaves bowing down to him and in the second one there was the moon, sun, and eleven stars bowing down and worshipping him.

When Joseph told his brothers these dreams they became angry with him and the hatred they had for him increased. Why? Because they knew what he was telling them - they would bow down to him, their little brother! Although the dreams that he had were true and from God, that did not mean that people would get excited about them.

Have you ever had a dream or vision from God and when you told someone they did not get excited? Did they do just the opposite, and maybe got mad?

Joseph's problem was not the dream, but that he told the dream. We find no where in the passage from Genesis that God told him to tell it. What can we learn form Joseph's situation?

1. Never tell everything to everyone. Some things that God gives to you are for you alone.

2. Only tell those who respect your dream. Do not waste your time on those who disrespect it.

3. Sometimes you are to never tell it. Look at the revelation that God gave to Paul. He said that

there were things God showed him that he could never tell.

Another thing that you must remember is that family, even parents, may not encourage you. Some may even be jealous. It is not important that everyone is happy about what God has spoken to you or called you to accomplish. What is important is that God has spoken and that it has been confirmed and blessed by true spiritual authority.
Posted by Joe Butler at 1:03 AM No comments:

New Series: How To Dream Again

Have things occurred in your life that have taken you down a different path than the one you always envisioned for yourself? Do you find yourself just getting through the day? Remember the bumper sticker that was so popular a few years ago, "Stuff Happens"?

If any of these questions have you shaking your head 'yes', then this Sunday is just for you. Pastor Joe Butler will be looking at how we go through life and stuff happens that causes us to give up on our dreams. And you are invited to come and learn to dream again.

Meeting at: The St. Augustine Community Theater
in the Ponce de Leon Mall next to J.C. Penney
For more information call 904-540-1624

Posted by Joe Butler at 4:45 PM No comments: