O God, whose blessed Son made himself known to his disciples in the breaking of bread: Open the eyes of our faith, that we may behold him in all his redeeming work; who lives and reigns with you, in the unity of the Holy Spirit, one God, now and for ever. Amen.
Posted by Joe Butler at 12:01 AM No comments: 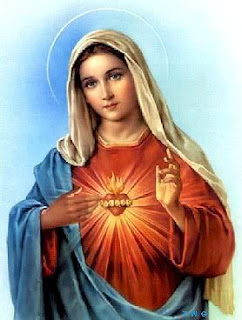 “Hail Mary, full of grace, the Lord is with thee. Blessed art thou among women and blessed is the fruit of thy womb, Jesus. Holy Mary, Mother of God, pray for us sinners now and at the hour of our death.”

As you read these words, I know that you may have some very strong emotions about them. But before you disregard this article, please take a moment and read it in its entirety.

Many Christians are scared to talk about the Blessed Virgin Mary. Many churches do not even speak of her. Think for a moment, when was the last time you heard a sermon on Mary? Many will preach about the Apostles or some other biblical figure but not Mary.

Many of you have barriers that arise when this subject is spoken of. For many the problem is not with Mary herself but with anything that appears to be Roman Catholic. After the time of the Protestant Reformation, anything that appeared to be Roman Catholic was done away with in the Protestant Church. If the Roman Church does it, it can’t be right, was the mindset of the day. But let’s look at a quote from Mark Frank, the 17th century clergyman, “because they (some) make little less of her than a goddess, Protestants make her not even a good woman; because they bless her too much Protestants will not allow her to be blessed at all. Therefore, there needs to be a balance between the two.”

Many protestants have no problem placing their favorite preacher on a pedestal. This evangelist or preacher is the greatest saint of God that has ever walked on the Earth. But the Mother of Jesus, they give her no place at all.

First, Mary is an example of humility. Mary was a poor humble peasant girl who answered the call of God. She was in awe that God would choose her to bear the Christ child. She did not brag about being the mother of the Messiah. She did not try to tell God how the Babe should be born. She simply said be it unto me as you have said.

What would happen if we had this kind of humility in our lives? Just think about it.

Second, Mary is an example in belief. At the Annunciation of Jesus’ birth, the words troubled her. She could not understand how she was going to give birth to Messiah. She had never been with a man. But even with a troubled spirit, Mary believed that God would perform a miracle and do what He said He would do. This is the same attitude we need. Are there things that God has spoken to you about? Then keep believing and don’t give up.

Third, Mary is an example in the depth of her spiritual life. Unlike many today, she did not grab the newest religious thought or pop doctrine. Instead, Mary pondered and mediated on what God was doing and saying (Luke 2:9 and 2:51). What would happen to Christ–followers if we copied what Mary did? We would be able to know what God is saying.

Fourth, Mary is an example in her life in the Spirit. Mary was one of the first Charisma-tics. Mary prophesied the hymn that is called the Magnificat (Luke 1:46-55). She was part of the gathering in the Day of Pentecost. Acts 2 states, they were all filled with the Holy Spirit and spoke in tongues or language they had not learned. Mary received the Baptism in the Holy Spirit and her prayer language. If Mary received the Baptism in the Holy Spirit, why not ask God for this gift? If it was what the Mother of Jesus did why not us?

Fifth, Mary is an example in her suffering for the Gospel. Christ-followers are never promised a life free from suffering. In fact, the Scripture states that many are the afflictions of the righteous, but the Lord delivers them. Mary knew suffering. She knew the pain that lay ahead for her and continued anyway. She knew the child that she would give birth to would die for the sins of his people. She knew the pain of accusations of promiscuity and illegitimacy. She knew the pain of watching her son be killed. But even in the midst of suffering, she never gave up. Mary knew what the destiny of her life and her son’s would be. Let us take up this example and be like Mary - never give up when life grows hard and we don’t fully understand it.

Sixth, Mary is an example in her steadfastness. Mary never left Jesus. When most of Jesus’ disciples and followers fled during the events of Good Friday, Mary was there. Even at the cross, the place of ultimate torture, she was a faithful witness. This is the attitude that is needed in every Christ-follower. We must learn that no matter what the cost, we will stand fast.

The Blessed Virgin Mary is a true example to the Church today in the 21st century. She is not to be worshipped as one would worship Jesus. But she is to be highly honored and extolled. Therefore, let us continue to receive strength and encouragement from her life.

Posted by Joe Butler at 3:59 PM No comments: