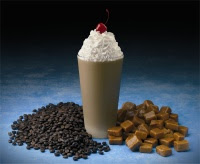 Tonight, I tried a Coffee Caramel Milkshake from Chick-fil-a. I hate cold coffee. So, I knew I was going to hate this. But it is really good. Try one.

Raised from the Dead-Florida Outpouring 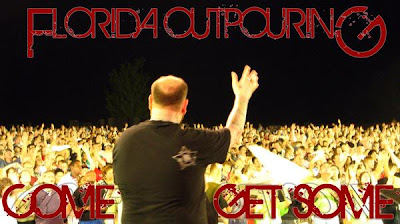 Darla writes:
A young lady from our Choir Ministry came to your revival several weeks ago. On May 8th at choir practice our Worship Leader had the young lady tell of your Revival in Lakeland, FL.

Then our Worship Leader had the young lady pray for anyone in our choir that wanted prayer because she believes in the transfer of the Anointing. When the young lady prayed for me, in her prayer she mentioned Healing, Revival in my family, and Restoration. We did not know what was coming our way but our Lord did.

On Saturday morning May 17th at 2:00 am in the morning I received a phone call that my husband’s Aunt Val had had a heart attack. Val had called her sister Shelia (my mother-in-law) told her to come over, then Val called the paramedics herself, then her son Tim.

When Shelia got to Val's home the paramedics were waiting and Shelia told them to bust in the door. When they found Val she was laying face down, gray, and no pulse. The paramedics did CPR for eight minutes until they got a faint pulse. She was taken to the nearest hospital.

The doctor's accessed her and then had the family to come in. We were told that they were not sure if she had a heart attack or not but she was on a ventilator, they put her in an induced coma.

The doctor was more worried about brain damage because she had been without oxygen for so long and she had shown signs of some damage. The doctor was transporting her to another hospital to do a new procedure called Hypothermia - it drops your body temp to 75 degrees and it helps preserve the brain. She was transported at 5:00 am.

At 6:30 am her son received a call that a test was performed and there was no brain activity. Shortly thereafter, her heart stopped two more times - two more times being shocked, they gave her medicine to start her heart once and once they did CPR.

They doctors performed another test - still no brain activity. The doctors told the family that she only had 20% chance of living - but her mind would not be the same. If her heart stopped one more time she would not survive.

By this time they were telling us she had had several heart attacks. Val's son finally made the decision around 12:30 pm on Saturday to have her life support removed. This decision only came after much prayer - and God did give him total peace. The family was told to go say their good bye. Most of the family are Christians. As each one of us went in we had prayer with her.

Three of my sister-in-laws and my self anointed her with oil and had prayer. While we were praying, she would start to shiver from the top of her head - then it would go through her body to her feet. She did this several times.

One of us asked what was that - we knew the Lord was working on her - The nurse said it is only where she is warming up. While in the waiting room the family read Hebrew 11 - the faith chapter - we broke out in worship and song.

At about 3:15 was time we thought it was all going to be done - Val's son was told there was a problem with organ donor. Val had requested it but her son said no. He was afraid that no autopsy could be performed. So the organ donor corporation was called in… they are called CORE. They were over an hour away.

At this time some of the family thought that this was a bad diversion - they couldn't believe that when the decision was made and there was peace that it had all stopped.

When CORE finally came, they told her son that they would only use the liver and the kidney and it would not interfere with the autopsy. Once again, any family member that wanted to go back could. One last time, prayer came from the very last visitors.

We were told that CORE would contact the doctors in Pittsburg and see if they could use any organs, because once you are over 50 they usually don't. We all left around 6:00 waiting on the final call.

A family friend/pastor stayed - he asked the nurse - could you check and see if there is any blood pressure or pulse so I can tell the family - the nurse checked and there was nothing. All the machines had been taken off but the breathing tube. So the pastor/friend left.

When the nurse was with her she checked one more time- nothing - then she pulled out the tube - Val's hand went to her mouth - the nurse jumped and said that had to be a reflex - then Val opened her eyes.

Jesus stepped in when man stepped away - when doctor's could do no more - Jesus did the rest.

We all went to see her Saturday right after the call. She knew everyone. Sunday, she was more alert and carrying on conversations with us.
Posted by Joe Butler at 12:09 AM No comments:

What began as a week of meetings at Ignited Church in Lakeland, FL, has continued for the past 38 days. There has been an outpouring of God’s healing and Heaven has come to earth and touched the city of Lakeland. As the healings and miracles began, the crowds began to grow. The meetings moved from the 700 seat Ignited Church to a larger church, then to the Lakeland Civic Center and then to Tiger Baseball Stadium. Hundreds have come to a personal relationship with Jesus and thousands have been healed and received miracles. The deaf are hearing, the blind are seeing and the cripples are walking.

One of the marks of this move of God is people are receiving an impartation to carry this back to their communities. Five pastors from Ireland came to receive an impartation and have carried it back to Ireland. They have begun a series of meetings that is like what is happening in Lakeland. People from all over the world are flying to Lakeland to “come and get some.”

As this move of God spreads, why can’t it come to St. Augustine – the Nation’s Oldest City? I believe that the time has come for the healing power of God to be released in St. Augustine. We only need to want God to send His healing power upon our city.

This Sunday is Pentecost Sunday. This is the day that the church celebrates the coming of the Holy Spirit and the birth of the church.

Are you hungry for a move of God like this city has never seen? Come and join us as we cry out for the outpouring in our city. We will celebrate Pentecost with a Miracle and Healing Service Sunday at 10:30 am. If you need a miracle or healing come and expect God to touch your body. We meet at the St. Augustine Community Theater in the Ponce de Leon Mall next to J.C. Penney. For more information call 904-540-1624.
Posted by Joe Butler at 2:56 PM No comments: