Almighty and everlasting God, increase in us the gifts of faith, hope, and charity; and, that we may obtain what you promise, make us love what you command; through Jesus Christ our Lord, who lives and reigns with you and the Holy Spirit, one God, for ever and ever. Amen
Posted by Joe Butler at 10:30 PM No comments:

Tortured for the Truth 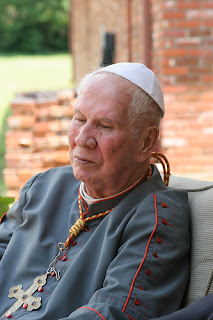 The above picture is of Patriarch Luis Mendez of the Brazilian Catholic Apostolic Church. He is now in his 80's. When he was in his 20's and a young Roman Catholic priest in Venezuela he began to proclaim the grace of God and God's love. During the 1940's he even began to celebrate the Mass facing the people instead of having his back to the people. Many of the things he began to teach and practice were later accepted by the Roman Catholic Church.

The day came that the government arrested him, took him to a small room, sat him down at a table and told him to sign the piece of paper on the table . The paper was a statement that he was renouncing what he had done and what he was teaching. When he refused to sign this document, the officials took a hot iron and placed it in his hand - burning his hand. He still bears the scars today. He was given an opportunity to sign again, but again he refused. They hooked him up to electrons and shocked him with electricity. He still bears the scar today. Then they broke his arm before taking him to an island where they left him to die. He had no food, water, or clothing. Some local fisherman discovered him and helped him. Finally, his mother learned of his whereabouts and came to the island.

Word began to get out about what happened and the Mexican ambassador began to negotiate with the government concerning this situation. Eventually a boat showed up and he was told he had to leave the country and would be taken to Panama. He was further told if he ever came back to Venezuela he would be killed.

There was a former Roman Catholic Bishop by the name of Carlos Durate Costa who had been following these events. In the process of time Bishop Costa went to Panama and consecrated this young priest as a Bishop in Christ's one holy catholic and apostolic church. Bishop Mendez moved to Brazil and has been in Brazil ever since.

Recently Bishop Kenneth Myers (of the South Central Diocese of the Communion of Christ the Redeemer-CCR) was in Venezuela working with a group coming into the CCR. Bishop Ken told the story about the Patriarch and then shared a word with Bishop Alexander Barroso and his people. The Patriarch told Bishop Ken to go lay hands on Bishop Barroso and pass his apostolic succession to him. He then told him to complete the work that he had begun. That's a heavy responsibility. What was begun 60 odd years ago is now going to be brought into fruition.

God grant Your grace to Bishop Barroso as he steps into his destiny. May you watch over him and guard him.

Prayer (Collect) of the Week

Almighty and everlasting God, in Christ you have revealed your glory among the nations: Preserve the works of your mercy, that your Church throughout the world may persevere with steadfast faith in the confession of your Name; through Jesus Christ our Lord, who lives and reigns with you and the Holy Spirit, one God, for ever and ever. Amen.

Posted by Joe Butler at 4:41 PM No comments: